The Story Safe House is based on a short story written by Dr. Anwar Hossain. The story takes place in Bangladesh during 1976 during the military rule. The time was very unpredictable.

What was the driver for the project?

Few years ago, Dr. Anwar Hossain, the original author of what later I titled, The Safe House, and I were on a train ride from Dhaka (Bangladesh) toward Mymensingh to his country home in the village.

During that journey, he had mentioned that his first collection of short stories, called Chakraborti’r Gore Fera (translation: Chakrabarti’s Homecoming) was just published and he would give me a signed copy.  I was delighted.

On a subsequent road trip with his family, we were returning from visiting an orphanage called International Angel Association founded by Mrs. Yuriko Kawamura, in the outskirts of Dhaka.

Night had fallen, and Dr. Hossain, with a forlorn gaze out the window of the micro-bus, the topic came up and he recollected the dark events that took place in 1976. He thought of Chakrabarti, the young Hindu boy whom he had met while he was detained by the secret service who brought him to this shack like place, called the Safe House for interrogation. The boy was allegedly an Indian spy.

As Dr. Hossain was describing the chilling details of detention, interrogation and its aftermath, I immediately started to visualize the story like a cinema and thought that it would make a great short film one day.

At the end of the journey, he gave me an autographed copy of the first edition and I read it during my morning commute to my job in New York City with keen interest. I instantly fell in love with the story and the characters and decided to make this into a short film and in 2018 we went back to Bangladesh to produce the film.

The Safe House is not only a great film from story point of view but it is also a great way to share with the world the true historical events that took place in the dark hours of 1976 when rebels (rank and file soldiers) and civilians were taken into military custody for interrogation and never returned.

Another important goal of this film was to invoke questions about that dark time in our history and create awareness among people especially the youth generation who were either too young to remember or not born at that time.

Writing the script was very interesting but a challenging process for me. On one hand the dialogues needed to be in Bengali for the actors but on the other hand I wrote the description in English as it is always faster and easier for me to type in English. Once I finished the final script it was then translated back to Bengali for cast and crew and direction.

Planning for the shoot

Planning the shoot was the most difficult task.  I was still in America without any access to any dependable production company. I was skeptical as I had heard horror stories of long-distance production but the burning desire to pursue this project kept me pushing forward to look for the right resources.

It was dismaying at first, but through a filmmaker friend in NY, Saud J. Tutak, I was able to find a producer. Initially there was a lack of trust and confidence on my part as I have never met the person and only communicated via phone.

The initial conversations also didn’t give me enough confidence to put my best foot forward. I hesitated. The only thing the person texted, was ‘Interested,” which I wrote off as, “not so great communication skills.”

But then after couple of phone calls I started to get a lukewarm feeling and I thought that there is no harm in trying. I sent my script and project plan. My producer soon became more involved and I started to feel confident. This is going to work I thought and I got super excited.

We started to communicate frequently via email and messenger, cell phone. Everything started to come together once I the producer started to send me pictures of a locations. I started to believe that the producer was also vested – simply in good faith. Then a funny thing happened. It freaked me out one day when I thought they had stolen my story and filmed it without my consent. My heart pounded when I saw the video footage of one of the potential actors shouting his lines from the script, someone filming and another person yelling, ‘Action.’

In a faraway land where there is very little regard for copyright laws, anything is possible. But later I realized they were sending me some test footage. I later on I had a good laugh but I also felt embarrassed.

Over the next six months through phone conversation and emails, I shared my story, my vision I was finally able to gain enough confidence to fly to Bangladesh with a shoot date early November. 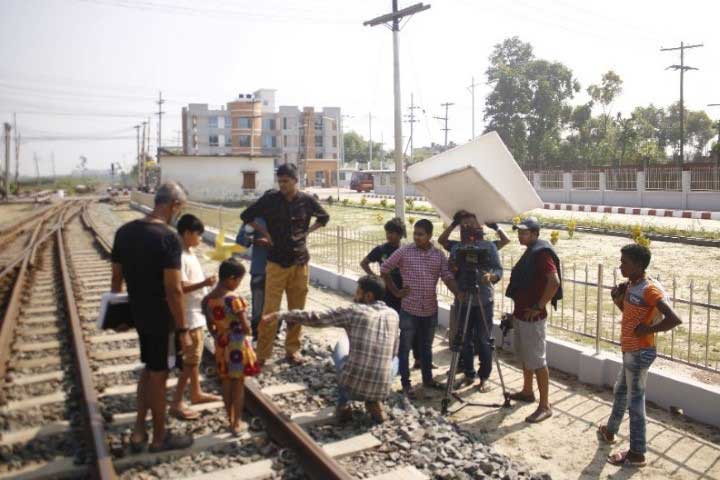 From the pictures of the location, I was convinced we could make it work. We needed to make a makeshift safe house and the building was very old and dilapidated and had lot of rooms. We could use the same location for the entire film and the cast and crew could even sleep there.

The Art Director didn’t spend much time planning but he finally came through transforming these blank, stale rooms into a military detention facility.

Casting did not start until I was there in Dhaka. We used one day to meet and greet the casting members but most of the selection was done using photos and our gut feeling though I wouldn’t advise anyone to do that unless there is serious time crunch.

There was not much time between my arrival and shoot date. We got everyone together and had one day rehearsal. 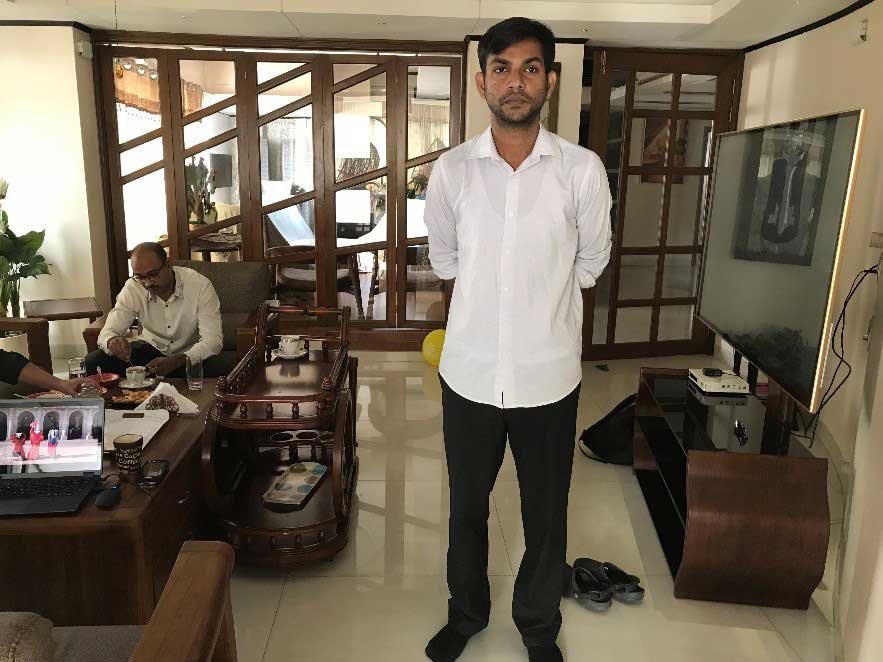 I had a phone screening with one or two cinematographers from the US. Once the person was selected, we talked about the project and my vision and decided to shoot with Sony A7sII which works wonders in indoors and low light. Everything was shot in 4K and SLOG 2. 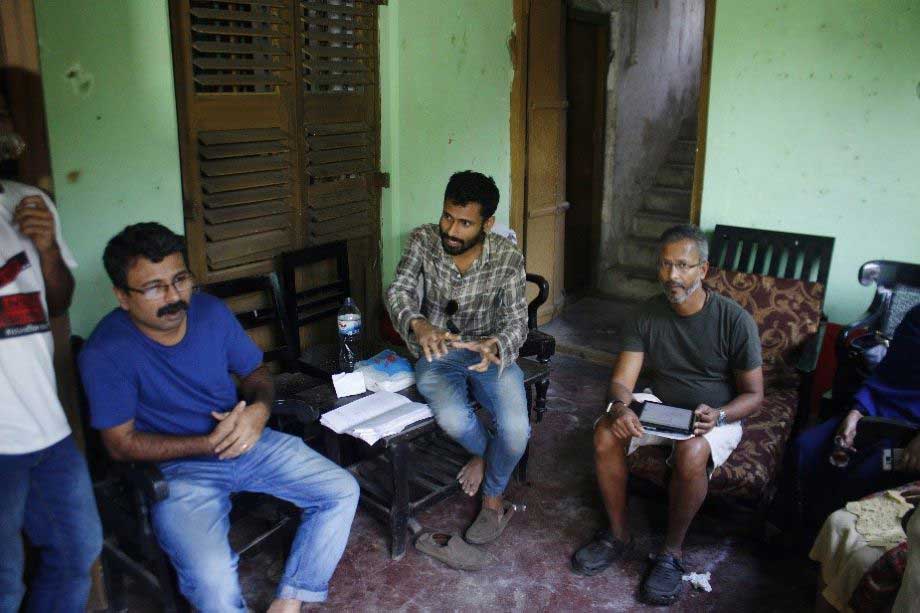 As far as audio, we decided to take sound on camera only. Everything was dubbed at a local audio design studio.

We hired a local costume designer who quite miraculously tailored all costumes by hand in a matter of two days.

We designed and custom made a wheel (torture device), the electric chair and other props that were used during filming.

Though we didn’t spend whole lot of time planning art design but at the end, the designer came through as we used the existing space and did a complete make over. After changing the wall paint and covering it with sand and dirt the location looked gritty and dreadful. 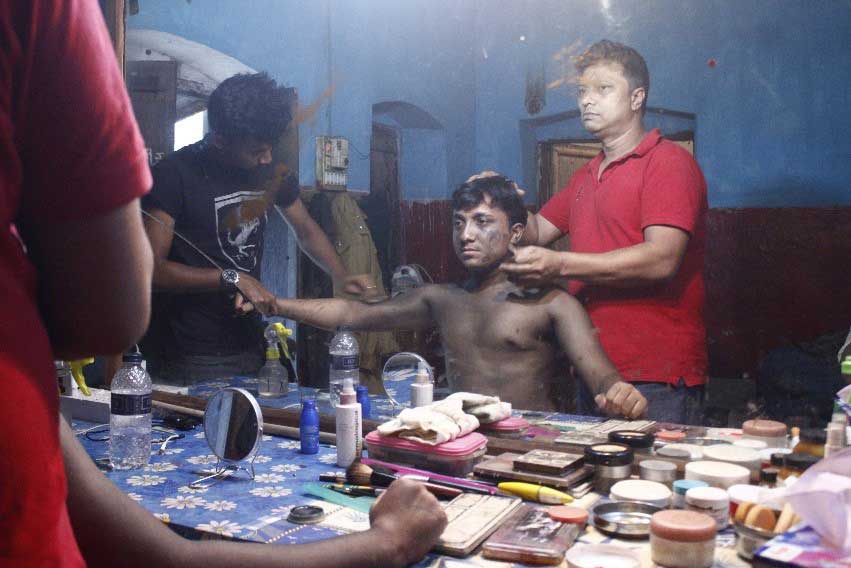 The production team comprised over 40 people between cast and crew. Trolley and other professional gears were used. The team was very efficient and they gave me the footage the same night and we reviewed together. 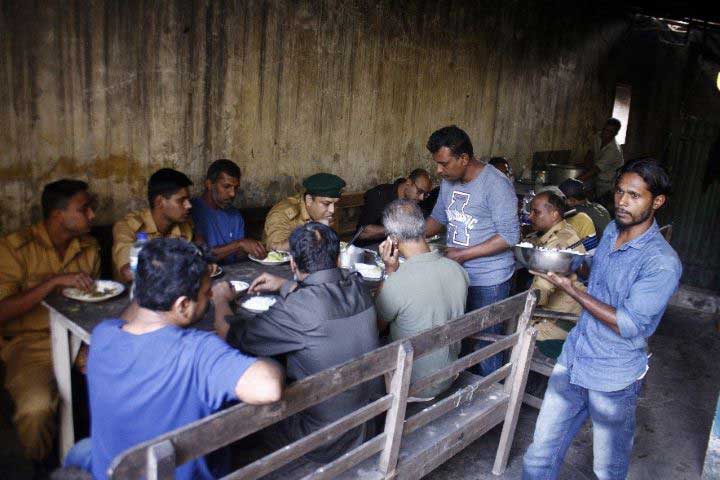 Mealtime – all hands on deck

What worked well is that there was unity, camaraderie and understanding between all the team members. I have never seen such team spirit before and everything worked like clock-work. At the end of the day everyone worked hard and most importantly the main casts continued to improve their performance. At the end of the day it was about people and their passion for film.

A great deal of time was spent on post-production, for editing, color grading. We found a great editor (Prokash) who turned around a rough cut within less than a day. Sound design was done by Audio People. All work was done remotely via email, file transfers. The time difference was an issue at times but when you love what you do who is watching the clock.

For this movie we decided to go with Karl Heortweard. We met and collaborated online.  Couple of years ago, I met a phenomenal filmmaker, Jatla Siddartha, during the Kazan International Film Festival in Russia who had told me about Karl who scored for his film, Love and Shukla. What a brilliant film!

Karl is a great composer who composed for the Dutch television and after speaking to him online we decided, Karl was our man.  To me the music is the heart and soul of a film and Karl’s creativity has opened the door to the soul. 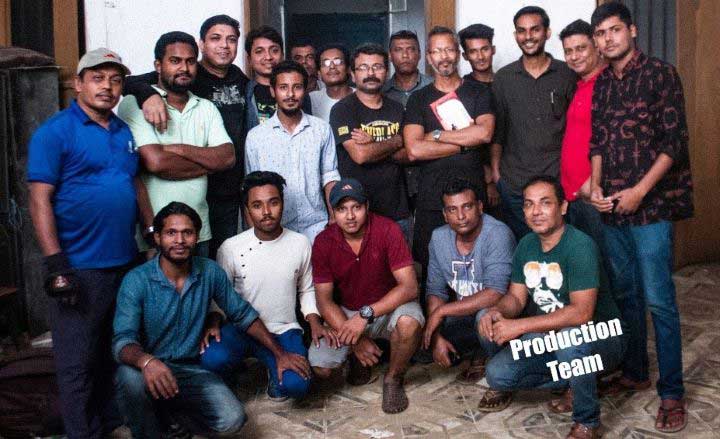